In 1855 was founded this publishing house by Innocenci López Bernagossi  as a result of the purchase of Librería Española, located next to  Rambla, that was acquired to Oliveres i Montmany brothers.

The collection keep around 11.000 photographies and 20 postcards. This  collection come from the graphic material of the López family publishing  house, owner also of the Librería Española. It contains documents  produced between 1890 and 1920. The collection was deposited to the  Arxiu Històric de la Ciutat de Barcelona between 1933-1934. 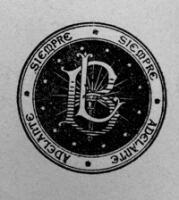 In 1855 was founded this publishing house by Innocenci López Bernagossi  as a result of the purchase of Librería Española, located next to  Rambla, that was acquired to Oliveres i Montmany brothers.

Innocenci López Bernagossi was born in Girona  in 1829. He became one of the most prominent bookseller and publisher in  Barcelona and Catalonia. Prior to acquisicion of the Librería Española,  he worked as a assistant for the Tasso house. Once he acquired the  Librería Española, and founded his publishing house he devoted to  bookseller and publisher work. Thanks to his work as a publisher, works  by  Apel·les Mestres, Víctor Balaguer, Josep-Lluís Pellicer, and many  other  writers and artists from the Catalan panorama of the time are  known.  He was also the founder of the weekly magazine of Esquella de la Torratxa, and La Campana de Gràcia.  His ideology was republican and he took part in the Revolution of 1868  and was a member of the Revolutionary Board of Barcelona.

In  1895, due to  the death of Innocent, the business was continued by the  son, Antonio López  Benturas, who bargained for the publication of  weekly magazines and their respective almanacs, since he began to use  them prolificly, photographic illustrations with a journalistic  objective.

When  Antonio López Benturas  died, was his son Antoni López Llausàs,  nièce of Innocenci López, who  closed the publishing house  of the family. López Llausàs  with the partners Manuel Borràs and Josep Maria Cruzet created the Catalònia bookstore in Barcelona, which was also an important publishing house as  the old Librería Española.

The collections published by the Lopez family are of a literary nature.  It's relevant the  presence of the great authors of universal  literature, classical  Castilian, Catalan authors of the moment and  select works of humorism.