In 1912 collaborated in De tots colors magazine. After living in Paris until 1914, he founded Los Miserables magazine and he directed L'Esquella de la Torratxa, La Campana de Gràcia i La Humanitat.  He became a figure of the bohemian life and popular Barcelona. Militated in the Esquerra Republicana de Catalunya, and in 1939 he went into exile in Aquitaine. The country was occupied by the nazis, stood next to the Resistance. In 1942 he returned to Acs (Occitaine), to devote himself to writing, but neither has enough public nor is any publisher that wants to accept the original Capdevila writing and gathering his drawer: over forty plays, and prose narratives material to write his memoirs. After years of war, returned from exile in 1950 and entered the Faculty of Letters and Human Sciences at the University of Poitiers as a professor of Spanish literature, and founded in 1970, at this university, the Aula de Literatura i Filologia Catalanes.

In 1973, he retired and moved to Sant Julià de Lòria (Andorra). A few years ago helped launch the publishing house Editorial Andorra, where he directed a literary collection that translated international known authors into Catalan. He actively participated in the cultural life of their host country until his death in 1980. 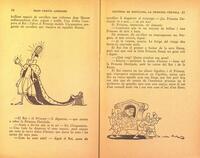