Ramon Llull (Palma, 1232-1316). Writer, philosopher, mystic, theologian and missionary. Born into a family of Catalan nobility, in around 1263 he underwent a series of religious experiences which caused him to abandon his high position in society and his family and to dedicate his life and work to converting non-believers to the Christian faith. To this end, he began a period of self-taught study which included learning Arabic.

He experienced a divine revelation which he made known as Ars or Art Lul·liana, a philosophical system which allowed him to demonstrate Christian truth to non-believers and which he wrote about many times in order to make it more understandable. He travelled around North Africa, the Middle East, France and Italy and wrote a considerable number of works in Catalan, Latin and Arabic.

Llull's prose, elegant and modern at the time, employed lexical and syntactical solutions key to the development of the Catalan language in science and literature. Llull and his thinking had many followers over the centuries and his works were translated very early on.

The Llibre de contemplació en Déu, the Art abreujada de trobar veritat, the Arbre de ciència, the Desconhort and El llibre de meravelles are to name but a few of the more than 250 titles that he wrote. 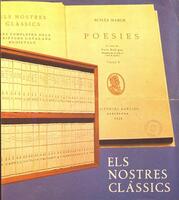